Known as the “dogs of the cat world,” Maine coon cats are a type of breed known for their friendly and gentle demeanor. They’re one of the biggest domestic cat breeds and have large, sturdy bodies.

They can weigh between 8 and 18 lbs, and their height ranges from 10 to 16 inches tall. And from tail to nose, they can stretch up to 40 inches. But aside from their larger body size, they also have a similar personality as pups.

They’re lovers, not fighters, and just want to be everyone’s friend — similar to a well-behaved dog breed. Of course, there are some exceptions to this, but in general, Maine coons and dogs get along well.

Image from Jody Parks on Pexels

Maine Coon and Dogs | What You Need to Know

Are you planning on introducing a dog or puppy into a house where a Maine coon already lives, or vice versa? This can be a nerve-racking experience. To make things run as smoothly as possible, here is everything you need to know about the integration process.

Image from abdülaziz yeşilbaş on Pexels

Maine coon cats are gentle and sweet-tempered by nature. They are not territorial or aggressive, so they do well with other animals living with them.

Establishing a good relationship between a Maine coon and dog is important from the get-go. These steps will set up the foundation for bonding between the two.

1. Assess the Dog Breed and Background

This is an important step to start with. Certain dog breeds have a high prey drive and thus, probably won’t do well with cats.

You also need to consider your pup’s background. It’s important that they were socialized as a puppy. And, you’ll want to know if they were neglected or abused at any point in their lives, since this might make them crave more of your attention.

Set up two different spaces in your house, one for the Maine coon, and one for the dog. They need to be completely separated, so the two aren’t able to meet until you’re ready for them to meet.

It’s important that each animal knows that they have their own private area and a safe place to return to that’s free from the other.

Let them approach the blanket on their own. Don’t force them to smell it or be next to it if they don’t want to be.

This process might need to be repeated several times until both appear relaxed in each other’s territory. Look for signs of stress and remove the animals and try again at another time if you detect any hesitancy.

5. Let Them Observe From a Distance

Image from zhang kaiyv on Pexels

When these two animals are ready to meet, let them observe one another from a distance. This can be done by separating two rooms with a pet gate or putting them in separate cages or crates.

The animals will be able to observe one another from a distance so they can familiarize themselves slowly. Again, if you notice hesitancy or stress, don’t rush this process. Separate them and try again later.

To make the environment as stress-free as possible, install a calming cat pheromone diffuser. This product plugs into your wall. It’s a drug-free solution that simulates a mother cat’s natural nursing pheromones to facilitate social connection and acceptance.

When you first introduce a Maine coon and a dog, make sure you’re there the entire time to monitor the situation and ensure everything goes smoothly. Keep the interaction short at first, around 10 to 15 minutes. Repeat this several times a day.

During this process, it’s a good idea to have some cat and dog treats on hand to give to them. This will make their interaction even more of a positive experience.

Most Maine coon cats don’t mind a bit of rough play with dogs or puppies. Just keep an eye on them at first to make sure it’s not too rough. Be especially cautious if you’re introducing a Maine cat to a bigger dog breed that might unintentionally hurt them.

These two animals might be a bit unsure of each other at first; that’s normal. But as long as there aren’t any huge red flags, they’ll usually warm up to one another over time.

Now that you know how to introduce a Maine coon with a dog, let’s go over some frequently asked questions and answers that cover their relationship in more detail.

Why Do Maine Coon Cats Get Along So Well With Dogs? 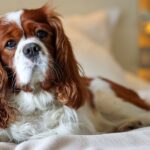 Maine coon cats and dogs get along so well because they share many similarities. Just like dogs, they love human company and are very sociable. Also, these cats are trainable and are known to follow their owners around the house. You can even take them for a walk on a cat leash. They aren’t known for being territorial or aggressive, which makes it easy to introduce new animals into the home. Further, Maine coons are not very phased by loud noises, like a dog barking.

Do Maine Coon’s Get Along With All Dogs?

There are certain dog breeds that are naturally more suited to living with cats. These include:
Beagle
Bulldog
Basset Hound
Cavalier King Charles Spaniel
Collie
Golden Retriever
Labrador Retriever
Papillon
Pug
Don’t panic if you don’t see your dog breed on this list. As long as they have an even temperament, there’s still a good chance the two will get along.

What Dog Breeds Don’t Do Well With Maine Coons? 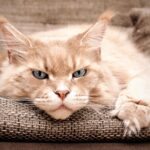 While a Maine coon’s personality makes it easy to get along with other dogs, this relationship needs to work both ways. If you have an aggressive dog breed that’s highly territorial or has a strong prey drive, the match might not work. They’ll be more prone to chasing your Maine coon around the house, which can cause them stress and anxiety. Although there can be exceptions to this list, you’ll want to be extra careful if you plan to introduce the following breeds of dogs to your Maine coon.
Afghan Hound
Australian Cattle Dog
Bedlington Terrier
Irish Wolfhound
Manchester Terrier
Samoyed
Siberian Husky
Smooth Fox Terrier
Standard Schnauzers
Whippet
Note: This list is not extensive; it’s just a starting point. There are other breeds that have a moderate to high prey drive. Make sure to research any dog breed that you plan to keep in the same household as a Maine coon.

Do Maine Coons Get Along With Other Cats? 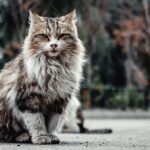 A Maine coon’s gentle and laid-back personality means it does well with almost all animals. This includes other Maine coons and cat breeds. They enjoy the company of animals and thrive in safe, social environments.
If you plan to introduce a new cat into a household with a Maine coon, or vice versa, make sure to also consider the above criteria and follow each one of the steps.

Do Maine Coons Do Well by Themselves? 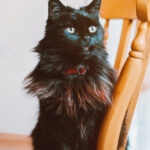 Maine coons are social by nature, and they prefer to have a companion. Whether it be another animal or a human, they enjoy lots of interaction and stimulation.
Although it’s not absolutely necessary, your Maine coon will appreciate having someone else around, especially if you work long hours and are gone most of the day.

This large cat breed is one of the friendliest. However, certain steps still need to be taken when introducing Maine coon and dogs. Always remember to take into consideration a dog’s personality, as each pup is different. And their personality might not do well with accepting other animals into the household.

Also, you need to consider a Maine coon’s history. If they previously lived in a house where they were treated badly by their owner or with a dog that was allowed to bully them, they might not socialize well with other animals.

Of course, having one of the least aggressive dog breeds will help. But that’s not to say these big friendly felines won’t get along great with other breeds too. If you follow the above steps, you’ll have the highest chance of success.

I covered all of the costs associated with writing this post on the maine coon and dogs. However, it does contain affiliate links. That means if you click through on some of the links in this article and end up making a purchase I may receive a small commission. It won’t affect the price that you pay. Just wanted to let you know.

Welcome to The Dog Snobs!

Hi I'm Amanda, an Australian who calls London home. I am mad about dogs so decided to put together website devoted to pampered pooches. Join me as we find out why dogs do what they do, how different dog breeds work, the best doggy products and much more

⇒ All About the Chihuahua Shih-Tzu Mix

⇒ All About the Cavapoochon